The 4 and 6 cylinder NEF engines, combined with the Dynamic Command ™ transmission offer significant advantages in terms of fuel consumption: studies carried out by independent bodies have shown these tractors offer a minimum fuel savings ranging from 6 to 9% vs the leading competitors on the market. This means that you can work more while consuming less!

Independent bodies measure fuel consumption values through the DLG Power Mix test: this consists of 14 test cycles that simulate different tractor workloads, measure fuel and AdBlue consumption, power and efficiency during the test cycle. Each test replicates both typical field applications, such as ploughing, harrowing, mowing, baling and heavy and light transport operations, to obtain a general profile of tractor efficiency. The test results shown below are based on average fuel consumption. Measurements report on Stage IV machines. The case study was done assuming no differences in fluid efficiency between Stage IV and Stage V machines. 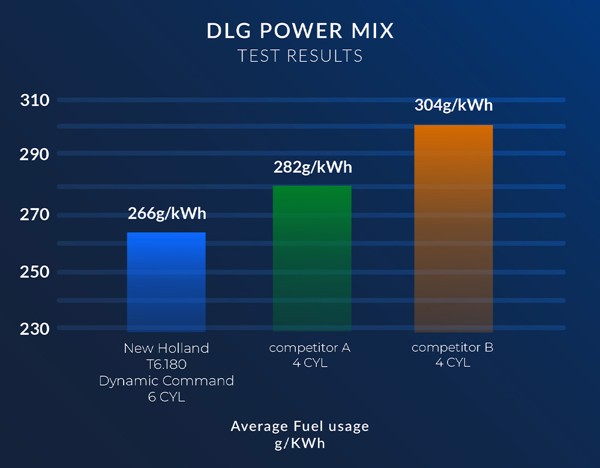 GET THE COMFORT OF A CVT AND THE EFFICIENCY OF A POWERSHIFT.
​DISCOVER MORE